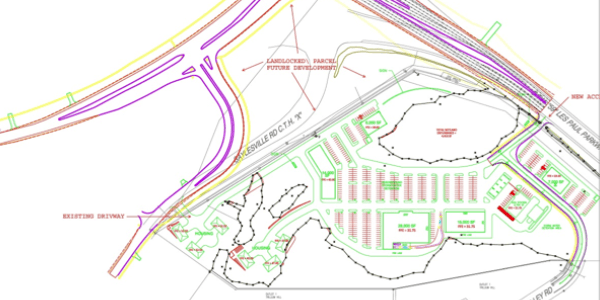 The proposed site driveway to STH 59 (Les Paul Parkway) is across from an existing church driveway that is also used by the fire department.  To mitigate potential future delays and improve safety for all vehicles at the intersection, a traffic signal warrant analysis was conducted and it was determined that traffic signals should be installed at this intersection.  The proposed site driveway to CTH X (Saylesville Road) was originally drawn in a location that would be negatively impacted by the poor site distance expected from the near 90-degree curvature of the roadway to the new connection with CTH X (Genesee Road).  TADI recommended that this driveway be moved further west across from an existing residential roadway to maximize sight distance from the curve.