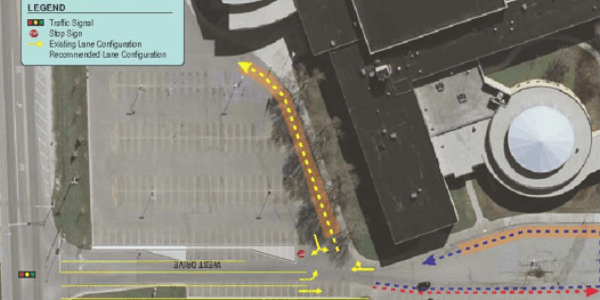 The New Berlin school district planned an expansion of the existing New Berlin West High School including the construction of a new a library/learning center, an auditorium and an athletic field house.  Changes to parking lot use as well as an expansion of the school population were expected to impact the overall site operations.  Traffic Analysis & Design (TADI) was hired to consider internal and external traffic circulation options as part of the work.  The study addressed improvements to the following: driveway utilization, special events, staff and student parking areas and circulation, parent drop-off locations, student driving behavior, pedestrians, bicyclists, bus circulation, pavement marking, signing, speed, and other general observations were all considered.  Modifications to the parent drop off area as well as parking lot reconfigurations and traffic signal modifications were part of the overall recommendations.  The following elements were conducted as part of this project: