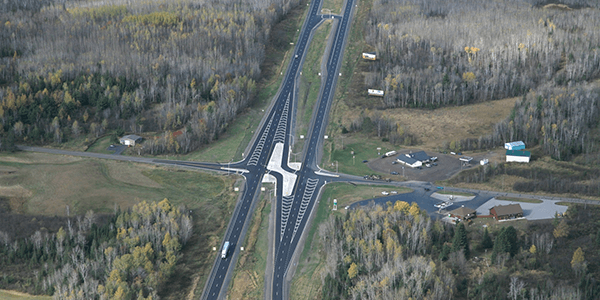 Since its construction in 2011, there have been 71 percent less crashes and zero angle, injury, or fatal crashes.

The high-speed, at-grade intersection of USH 53/B in northern Wisconsin had substantial safety issues. Plagued by severe right-angle crashes, this junction observed three fatalities and 30 injuries in fifteen years. With volumes that did not warrant an interchange, the Wisconsin DOT turned to TADI for a solution. TADI met with the department to understand the needs of this project and community concerns. Then TADI assembled and led an all-star road safety audit team that included an experienced highway designer, a police chief, a nationally recognized traffic safety researcher, and a traffic safety engineer. A creative solution brought to light was a new type of intersection called a J-Turn (also known as a Superstreet or Reduced Conflict Intersection). The J-Turn intersection innovatively reduces conflict points while allowing all movements to be served. The DOT ultimately chose a J-Turn as the preferred improvement and since its construction in 2011, through 2014 there were 71 percent less crashes and zero angle, injury, or fatal crashes.